COMMODITIES VOLATILITY COOLED OFF A BIT 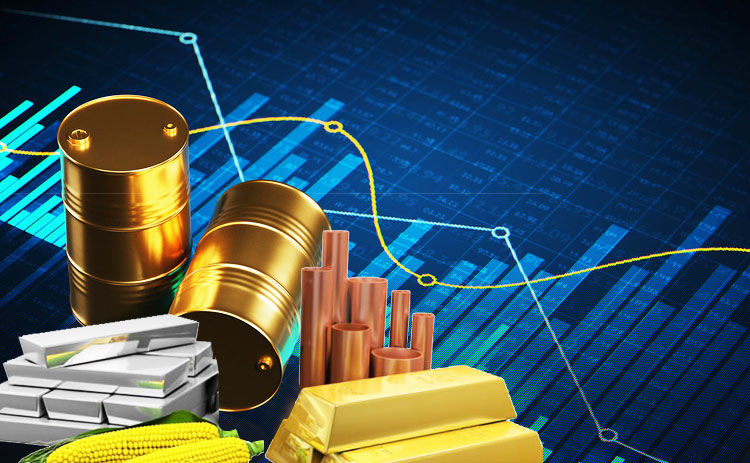 WTI crude futures bounced back to above $89 per barrel recovering from a 6-month low of $87.5 hit on Thursday but still were heading for an over 9% weekly loss, wiping out all the gains triggered by Russia’s invasion of Ukraine. Concerns are growing that a global economic slowdown prompted by higher interest rates will heavily impact fuel demand. Official data showed that US crude inventories unexpectedly grew last week and US gasoline demand dropped well below pre-Covid seasonal norms. Also, signs are emerging that supply is rising, with Libya’s oil production up for the second straight week. This week’s slump also came despite Saudi Arabia raising oil prices for Asian buyers to a record and OPEC’s decision to raise oil output scantily for September and warning of “severely limited” spare capacity.

US natural gas futures fell toward the $8.0/MMBtu mark amid prospects of weakening air-conditioning demand due to less hot weather and after EIA reported a bigger-than-expected gas storage build last week. Data showed US utilities added 41 billion cubic feet of gas to storage during the week ended July 29th, well above expectations of 29 bcf. Also, Freeport LNG, a key export terminal in Texas, agreed with regulators to restart as soon as October. Meanwhile, demand from Europe continues to support prices as the key Nord Stream 1 pipeline from Russia to Germany is currently running at 20% capacity. Russia has already halted shipments to Demark, Finland, Bulgaria, the Netherlands, and Poland and reduced supplies to Germany for not consenting to its natural gas payments demand in Russian rubles.

Gasoline futures tumbled below the $3-per-gallon mark, a level not seen since February, amid lingering worries about a potential recession-driven demand downturn even as supplies remained extremely tight following disruptions related to the war in Ukraine. Pressuring prices further was the latest EIA report showing an unexpected increase in inventories.

Heating oil futures fell to $3.2 per gallon, closing in on their lowest level since April, as traders digested the latest EIA inventory data and worry about the demand outlook. Heating oil stocks rose by 23 thousand barrels in the week ended July 29th, compared to a 12 thousand barrels decline in the prior week, as reported by EIA. On the demand side, cuts in Russian gas flows to Europe through the Nord Stream 1 pipeline could force consumers to switch to oil. However, growing recession concerns spurred by aggressive monetary tightening and against the background of slowing economic data are set to weigh on the demand outlook.

Gold lost significant ground on Friday, pulling back from its daily highs of $ 1,795 an ounce to around $1,760 amid a combination of a stronger dollar and soaring Treasury yields. Market moves followed a stronger-than-expected payroll report, which paved the way for the Federal Reserve's aggressive stance to cool an overheating economy. Putting a floor under prices were lingering concerns about a global economic slowdown and heightened US-China tensions over Taiwan.

Silver rose above the $20 per ounce mark, tracking other bullion after the Federal Reserve extended its tightening path with a 75bps interest rate hike in its July meeting. The move furthered the tightening momentum by major central banks, as inflation in the world’s largest economies have shown no sign of peaking. The ECB raised policy rates by a larger than expected 50bps increase and the BoE is likely to follow the same path next week. Still, prices remain close to the two-year low of $18.1 touched earlier in the month as concerns of economic slowdown drove investors to the US dollar.

Copper futures fell back to the $3.50 per pound level, partially erasing intra-day gains on Friday after strong labor data in the US ramped up bets that the Federal Reserve will continue its path to restrictive monetary policy. Hawkish expectations for the Fed's guidance add to concerns of a slowdown in the global economy that pressured Copper prices to fall sharply since June. Heightened geopolitical tensions in the Asian region also kept markets on edge, with China reportedly firing a barrage of ballistic missiles into the waters around Taiwan as part of its large-scale military exercises following US House Speaker Nancy Pelosi’s visit to the island. Meanwhile, major copper producers have recently reported declining output and supply risks due to various disruptions, providing support to copper prices.